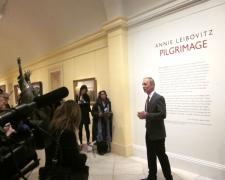 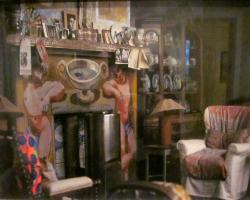 GessoHead recently made her first Official Press appearance at the Smithsonian American Art Museum, which has, fittingly, been my favorite outpost of the Official Arts Industrial Complex for a few years. I find the exhibits to be generally more lively, a bit more risk-taking and dare-we-say-it light-hearted, than the fare on offer at most of the mall institutions. Perhaps being a few blocks north of the mall has created a little rift in the bureaucracy’s gravitational pull.

Having said that, while an Annie Leibovitz show can hardly be considered risk-taking, Pilgrimageis a significant departure for her and a good reason to visit American Art if one is needed. For one thing, this exhibit of the work of one of the world’s most heralded portrait photographers includes no images of people, or at least, no literal images of living people. It is also the first time since Leibovitz hit the big time for her Rolling Stone rock royalty portraits that she has shown work not done on commission – these subjects and images reflect entirely her own choices and affinities.

Soon after the death of her life partner, Susan Sontag, Leibovitz embarked on a trip with the their children to historic sites, the kind that have been photographed to death by traveling families, like Niagara Falls and Graceland. She says that watching her children “stand mesmerized over Niagara Falls” began to teach her to “see again”. The experience launched her on the project that became Pilgrimages. The places she visited over the next two years, mostly in the US, but also several  in England, paint a broad brush of human accomplishment. They include the homes of Walden, Emerson and the Alcotts, Elvis Presley, Emily Dickinson, Georgia O’Keefe, Virginia Woolf and the workplaces of Pete Seeger, Sigmund Freud and Ansel Adams. Abraham Lincoln, Annie Oakley and Marian Anderson are included as well as Robert Smithson’s Spiral Jetty. Perhaps my personal favorites are the television set that Elvis Presley shot  and the studio cum sitting room of the painters Vanessa Bell (Virginia Woolf’s sister) and Duncan Grant. In both cases, the life force of the human subjects is still palpable.

The sheer scope of the subject matter raised some eyebrows among those at the preview; even the Guest Curator, Andy Grundberg, appeared a teench defensive about heading off possible suggestions that the exhibit might lack coherence. I initially felt a bit puzzled myself; it is not immediately apparent what the battlefield at Gettysburg may have to do with Sigmund Freud’s couch. And while some of the connections are still elusive, the unifying idea is clear. The subjects of the photos are the spirits of the people (all gone except for Seeger) contained in the places they lived and worked and the things they made and used. This is the stuff that the artists, creators and ground-breaking thinkers leave behind in the world when they go. What more fitting subject could there be for Leibovitz as she experiences the loss of Sontag?