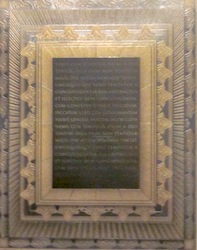 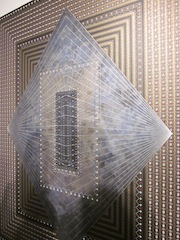 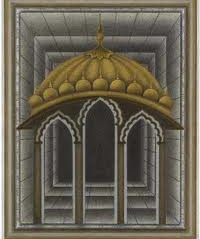 Anil Revri’s gorgeous show at AU’s  Katzen Art Center requires the visitor to slow down, shut off the constant stream of exterior and interior babble and meet the work in quiet openness. If that sounds like a description of meditation, it’s no coincidence; Revri describes the process of making his work as an exercise in meditation and it asks the same of those who view it.

It’s a big show, including both recent and older work, and all of it displays a consistency and dedication of mind that I, as an artist with a tendency to leap recklessly from medium to medium, truly admire. Painting and drawing lines, dots and shapes with absolute precision, moving the eye from the edge toward the center, Revri, more than most artists, makes it perfectly clear how each piece should be seen. Yet, this does not lessen the mystery of how the work affects the viewer.

I am particularly drawn to the most recent series, Cultural Crossroads.  Excerpts from the sacred texts and poetry of every major world religion are inscribed in their original languages into the center of each of these small pieces on paper. The text is surrounded by “frames” of tiny repeating geometric shapes that recall the mosaics of the Islamic world, where human imagery is prohibited. The pieces are all dark –  deep charcoal grays and blacks, dark bronzes and pewters. Collectively, they posit that the core of spirituality at the center of all religious expression is essentially interchangeable; an illustration, of course, of the Buddhist wisdom that there is one truth but many paths toward it. Perhaps not a revolutionary idea but one that bears particular meaning in today’s world.

AU hosted a gallery talk at the opening that featured our own Jim Mahoney at his most charming and erudite as well as Donald Kuspit, a Professor at SUNY Stony Brook who wrote the catalog essay and has a long history with Revri.  In describing the experience of this work, Mahoney used the phrase “a message from another world” and that is right on the money to my mind. Kuspit, whose malleable face sometimes seemed about to explode with the effort of containing all of the ideas pushing through his brain, argued that Revri should be seen in the line of modern-contemporary art as heralding a way past hyper-individualistic, “anything goes” post-modernism back to an appreciation for spiritual power and refinement of technique and intention. Interesting and thought-provoking, but I found it very odd that none of the  speakers discussed Revri’s work in the context of the Indian tradition which it so strongly reflects.