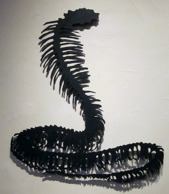 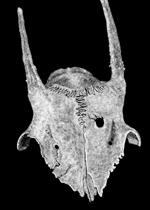 Ruth Trevarrow spends her days working at the Smithsonian as the registrar of the institution’s Traveling Exhibition Service. There, she helps to ensure that the vast array of priceless stuff owned by the Smithsonian is shared with the people who own it – Americans all over this country. Trevarrow is also an artist who has shown regularly throughout our region for nearly 20 years. The qualities that make her successful at her primary paying gig, including her attention to detail, her sharpness of observation and her love of the diversity of artifacts in the Smithsonian’s possession, are on view at the current exhibition of her artwork at the Athenaeum in Alexandria.

Bare Bones represents the culmination of Trevarrow’s year of study of marine mammal bones in the Smithsonian’s Osteo Prep Lab. Her work has long dealt with the poignancy of the stark physical remains of animals threatened by  human activity. Admitted to the Smithsonian’s bone closet, she was given the resources and time to study animal bones and absorb their delicate strength from the inside out.

Trevarrow tells the animals’ story in a variety of media, in objects ranging from wooden cutouts of full dog and deer skeletons in the postures of living creatures, painted the deepest matte black to fine, delicate line drawings of life-sized fish vertebrae, deer and coyote skulls. The uncoiling snake cut from stencil board is a marvel of workmanship. The work is stark and unprettified; the animal traces command respect and manifest beauty on their own uncompromised terms. Each piece in this show is cleanly and beautifully presented, as might be expected from the work of a guardian of priceless objects.

The Athenaeum is an increasingly adventurous art venue; the spare elegance of the 200 year-old structure in old-town Alexandria is a welcoming setting for contemporary abstraction and the President and primary curator, Twig Murray, has a good eye. The opening reception was jammed despite a soaking rain that surely discouraged the only moderately motivated. Those that made it through the weather were clearly ready to fall in love – the red dots were thick on the walls. I am not immune to the cynicism that proximity to the commercial art world frequently induces, but this show and the reaction to it  struck me as something quite pure; the artist communicating and the viewers experiencing something beautiful and memorable.