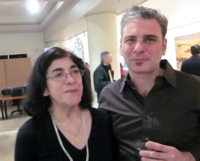 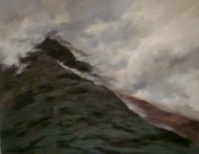 Freya Grand and Michael Sirvet have been combined by curator Claudia Rousseau in a visually stunning show at the Artery Plaza in downtown Bethesda. The space, formerly the home of Osuna Gallery, has been made available by the building’s owners for temporary exhibition space (and their hospitality apparently extends to a lovely opening reception). The high-ceilinged environment is perfect for Sirvet’s increasingly large and ambitious sculptures. An architect by training, he shows the architect’s affinity for repetitive forms and the engineer’s proclivity for perfection and symmetry. I have always been a fan of Michael’s metal constructions, the pieces that look to me to have the shapes of a bird’s closed feathers or a monster seedpod, punctured by a bazillion perfectly-shaped, evenly-spaced holes. The work shown here, many hung from the ceiling, takes them to another level.

Freya Grand makes large-scale landscape paintings that are at their best when the scene is a particularly dramatic one. There are arresting works of great mountains and threatening skies that place her in the long tradition of romantic landscape painting. She paints with an economy of style yet the ability to pull off a great flourish of gesture.

The curator here, Claudia Rousseau, is an active presence on the DC arts scene, a professor at Montgomery College and a frequent art reviewer for the Gazette newspapers. The combination of Grand and Sirvet would not necessarily be the most obvious choice; it is successful because both artists are infatuated with extravagant, dramatic natural forms and the work of both shows a strength in execution that can hold its own.

The show is up until May 13 – plenty of time to get on the Metro and check it out.