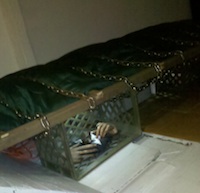 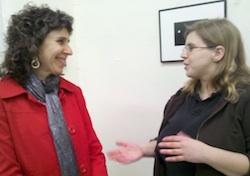 Tom Drymon and Peter Harper, artists themselves, have carved out a small space up a rickety staircase on 14th Street called Harmon ArtLab (HAL) that is dedicated to showing site-specific installations as well as wall-hung work. Their goal is to encourage artistic risk-taking “unencumbered by …the marketplace”. They provide the space and freedom for artists to try something completely new as well as an on-line forum (www.harmonartlab.com) where the artists discuss their intentions and dialogue is encouraged. The nature of a risk, of course, is that it will sometimes fail. Here’s hoping that when a work of art fails, it fails big, because the beauty of this project is the freedom to go for it.

This month, the site-specific installation is “Draft”, by Ira Tatelman. An architect, Tatelman has created an eerily evocative space, a tiny, dark bedroom that could exist in a basement, an abandoned building or perhaps under a bridge. The bed is tied in chains but recent habitation is indicated by the dirty dishes tucked discreetly underneath and the few totemic objects placed thoughtfully around. Tatelman says he has attempted to create a “space in transition”; he has succeeded in using the small, narrow space to evoke the chilling impermanence of comfort.

In the other room, photographer Alexandra Silverthorne has hung MidNights, a series of small-format photographs taken during late-night trips around her neighborhood. The shutter was left open for varying periods of time and the results were not apparent until she got home to look at them. The images are dark, with objects and places partially limned by light and often unfocussed as they register the passage of time. The one consistent subject of the pictures is the movement of the photographer through a fairly menacing environment.

These two exhibits, uncoordinated by the artists, who had virtually no interaction with each other prior to installation, make a surprisingly coherent statement. To my eye, they are both dealing with the same physical and mental space of transition and uncertainty, Tatelman on the inside and Silverthorne on the outside.
So, the show at HAL now issatisfying even judged by conventional standards, but why should a civilian want to patronize HAL, or any other “risk-taking” art venture when there are so many venues in town that can be counted on to provide beautiful, enriching art? Let me make the case for pushing oneself to see new and challenging art.

I was not a big Jackson Pollock fan. I had seen a few of his paintings scattered around museums and a lot of reproductions in books; they didn’t move me. Then came the 1998 Pollock retrospective at the Museum of Modern Art in New York. The huge show began with his very early representational paintings and then the muddy beginnings of abstraction. Then the drips and pours started tentatively to appear and finally, we reached a large room, open at both ends – the hallway to the work that changed the art world. High on each of the two walls hung a mural-sized Pollock drip painting. As I stood between them, the air began to vibrate and my body with it. The hair on my neck stood on end.

It was a pure, utterly unexpected, physical reaction, the kind that demonstrates in the most palpable way that art is always a collaboration between viewer and producer(s). As Marcel Duchamp said: “the creative act is not performed by the artist alone” – and he was an artist who demanded the viewer’s response. In some cases, the result for the viewer is a visceral experience, as it was for me with the Pollocks. Rothko knocks me out in the same way. Sit in the Rothko room at the Phillips for a while and you will start to hear the universal om.

In other cases, the response is more analytical; the work will provoke thought, hopefully in addition to rather than instead of the visceral reaction. Picasso’s Guernica perfectly combines the two, for one example.

But, you may protest, those are works by famous artists that hang on a wall and are beautiful. Everything new out there today moves and screams or it’s mostly ugly or it makes no sense. Allow me to make the case for the value of looking for the gold amidst the dreck.

First, a personal example: About 10 years ago, I was in Cambridge, MA, and wandered into a large show of international conceptual art at MIT. I tend to regard most conceptual art as too damn much work for too little reward, but I had a couple of hours to kill so I went in. The happy result is this example of what there is to be gained by allowing yourself to experience new work. One large wall was covered edge to edge by snapshots, each composed of two people, a young Korean woman and an American man in military uniform, posed formally in front of one of a few painted scenes of natural beauty. The inventory of a retired Korean commercial photographer, those snapshots of couples brought together temporarily by the political choices of their countries’ leaders, evoked wave after conflicting wave of emotion: anger at the idiocy of war; tenderness for the obvious feelings of these people for each other; sadness in the knowledge that almost all of these relationships lasted only as long as the tour of duty and again, anger at how insignificant each of us really is and how little we actually control our lives, notwithstanding all of the effort we make to convince ourselves otherwise. I have thought of this piece many times since then and it has genuinely enriched my life.

Now the scientific case: experiencing new things makes you smarter and extends your life span. There is a substantial body of research establishing that providing stimulation for your brain will help to keep it from turning to mush as you age. This just stands to reason – use it or lose it. Newer research further indicates that new experiences actually extend effective time. David Eagleman, a prominent young neuroscientist, has pioneered the idea of “brain time”, demonstrating experimentally that time stretches out when you exercise your brain and shrinks up when everything is proceeding just as expected. Josh Foer, who wrote Walking with Einstein, sums it up like this: “Monotony collapses time, novelty unfolds it.”

Finally, the social case: People who are open to new experiences are more interesting. They have something amusing to add to the conversation, they are more engaged in the world around them. I’m pretty sure they’re more sexy and get invited to better parties.

In conclusion, if you don’t want to grow up to be a stupid, boring old person, come to see art that is new and different to you. That is the manifesto of Harmon Art Lab and providing those opportunities are its mission.